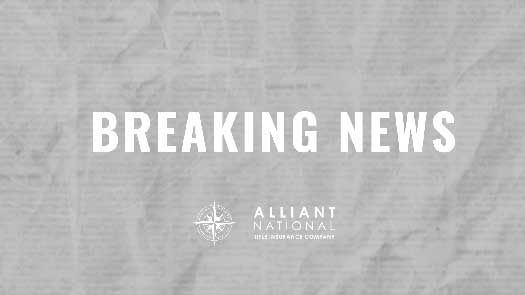 Alliant National, who recently completed a partnership deal with Presidio Investors, Ranks No. 4811 on the 2018 Inc. 5000

LONGMONT, Colo. – Inc. Magazine recently revealed that Alliant National Title Insurance Company is No. 4811 on its 37th annual Inc. 5000, the most prestigious ranking of the nation’s fastest-growing private companies.

The list represents a unique look at the most successful companies within the American economy. This is the second time Alliant National has been named to the Inc. 5000.

Alliant National also recently completed its next stage of growth through a partnership with Presidio Investors, a private equity firm specializing in mid-market companies.

“Alliant National is honored to make this prestigious and highly competitive Inc. 5000 list again,” said Robert Grubb, Alliant National CEO and president. “The magnitude of strategic planning and hard work that goes into being named to this list is not lost with us.”

Regarding Alliant National’s recently completed partnership with Presidio Investors, Grubb announced to Alliant National leadership and personnel that they and their positions will remain the same. He added that, “With the help of our trusted agents and our amazing team, we’ve built a thriving company aligned with the finest independent title insurance agents in the country. Our new partner [Presidio Investments] maintains a culture that aligns well with ours, and we believe this partnership can support our plans to strengthen and expand our network of independent agents.”

“If your company is on the Inc. 5000, it’s unparalleled recognition of your years of hard work and sacrifice,” says Inc. editor in chief James Ledbetter. “The lines of business may come and go, or come and stay. What doesn’t change is the way entrepreneurs create and accelerate the forces that shape our lives.”

The Independent Underwriter for The Independent Agent®, Alliant National believes in putting other people first. The company protects the dreams of property owners with secure title insurance and partners with 400+ trusted independent title agents as a licensed underwriter in 22 states, with annual revenues exceeding $110 million. Visit joinalliantnational.com for additional information.

The 2018 Inc. 5000 is ranked according to percentage revenue growth when comparing 2014 and 2017. To qualify, companies must have been founded and generating revenue by March 31, 2014. They had to be U.S.-based, privately held, for profit, and independent—not subsidiaries or divisions of other companies—as of December 31, 2017. (Since then, a number of companies on the list have gone public or been acquired.) The minimum revenue required for 2014 is $100,000; the minimum for 2017 is $2 million. As always, Inc. reserves the right to decline applicants for subjective reasons. Companies on the Inc. 5000 are featured in Inc.’s September issue. They represent the top tier of the Inc. 5000, which can be found at http://www.inc.com/inc5000.

Founded in 1979 and acquired in 2005 by Mansueto Ventures, Inc. is the only major brand dedicated exclusively to owners and managers of growing private companies, with the aim to deliver real solutions for today’s innovative company builders. Inc. took home the National Magazine Award for General Excellence in both 2014 and 2012. The total monthly audience reach for the brand has been growing significantly, from 2,000,000 in 2010 to more than 18,000,000 today. For more information, visit www.inc.com.

Presidio Investors was founded in 2007 with the goal of bringing large buyout expertise to entrepreneurially-led companies. Presidio invests in talented management teams to provide resources, including operational support and capital, for these entrepreneurs to succeed. For more information on Presidio Investors, please see presidioinvestors.com.