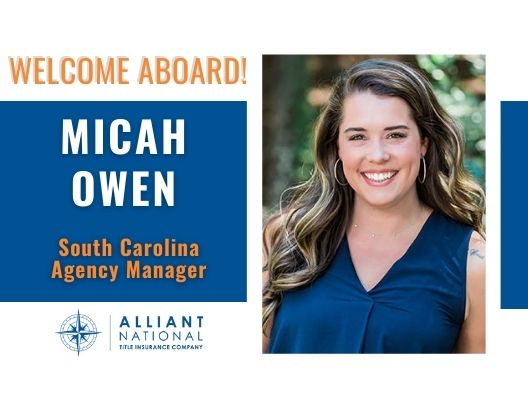 “I am blessed to begin my career with Alliant National at such a young age,” said Owen. “My co-workers have already made me feel like family. They have all been exceptionally welcoming, and it means a lot to see how excited they are for me to start.”

“When you find and hire a professional like Micah, it isn’t difficult to get excited,” said Tracey Webb, Senior Vice President and Southeast Region Agency Manager. “In meeting her, I was immediately struck by her versatile abilities, strong industry knowledge and her interest in and dedication to the agents we serve and support. We are lucky and thrilled to have her in this important role.”

Having worked for years in the fitness industry before moving to the title insurance field in 2017, Owen brings a commitment to excellence and a knack for relationship building that will be an important asset to Alliant National’s work in the region.

Perhaps unsurprisingly, Owen is a fitness guru in her personal life. She is most happy when spending time with her family, exploring South Carolina’s Lake Murray and playing kickball with her team of five years.

The company protects the dreams of property owners with secure title insurance and partners with 600+ trusted independent title agents as a licensed underwriter in 30 states and the District of Columbia.