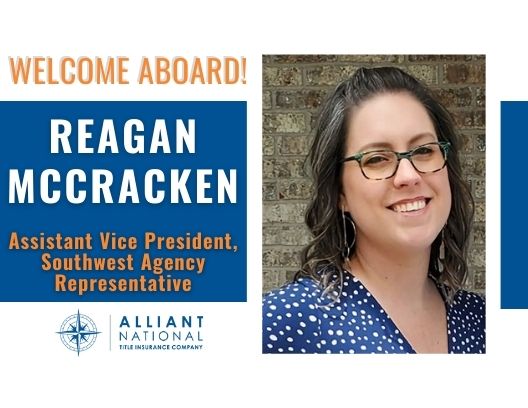 Written by Cathie Beck on February 22, 2022. Posted in Press

McCracken is a seasoned and savvy title insurance professional and brings years of experience to Alliant National. Having previously worked for a national title insurance agency in Texas, she is a passionate member of the title insurance community and holds membership in the Texas Land Title Association (TLTA).

In her new role as AVP and Agency Representative for the Southwest, McCracken will be involved in all aspects of the company’s operations in the region. Her primary responsibility, however, will be to support, maintain and grow Alliant National’s footprint in Oklahoma.

“I really couldn’t be happier to accept this position at Alliant National,” said McCracken. “Alliant National’s high reputation, the quality of its agents and the professionalism of its staff speaks for itself. I’m honored and excited to work alongside such a fantastic team, and I look forward to applying my years of experience to help the Southwest team operate as effectively as possible.”

“Both Alliant National and I have acquired a true talent in Reagan,” said KC West, Alliant National’s SVP and Southwest Region Manager. “Her industry knowledge and experience are incredibly impressive. She also intuitively knows how to address many of the complex situations that agents routinely face.”

Alliant National distinguishes itself from competitors by combining strong underwriting capability with independent agents’ in-depth knowledge of local markets. The result is a nationwide network with deep roots in local communities, and a wealth of expertise that is flexible, nuanced and continuously growing. Visit alliantnational.com for additional information.