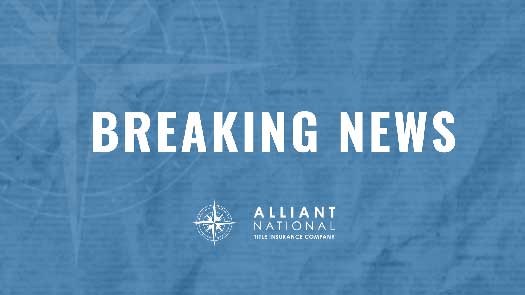 Written by Nikki Smith on September 30, 2019. Posted in Press

LONGMONT, Colo. (Sept. 25, 2019) – Alliant National Title Insurance Co. announced today that Bob Grubb has been named the Vice-Chairman of Presidio ATC Holdco, LLC, and has passed on operational duties as President and CEO of Alliant National. Grubb will continue to be an integral part of the company as a member of the Alliant National Board of Directors and a shareholder.

Grubb is a co-founder of the company, which launched in 2005 as a regional underwriter operating in Colorado with a few key agents and first year revenues of $131,000. Today the company underwrites for 537 agents in 24 states, with 86 employees and revenues of $126 million. For nearly 15 years, Grubb has led the company that is now the largest independent underwriter in the nation with no direct operations to compete against its agents.

“Bob’s passion for helping people, and his challenge to employees to really see each other as people, and be genuinely curious about the needs of agents, has created the culture that drives Alliant National’s success,” said Phyllis Mulder, Chief Legal Officer of Alliant National. “The culture Bob created will very much remain at the forefront of who we are and how we do business.”

“David and I have worked together for several years to reach this day, and as the company transitions, we will continue to work together, in service to independent agents and our people,” Grubb said. “David is strategic, incredibly smart, and uniquely capable of leading Alliant National into the future.”

Scott Hendrickson, CFO and company co-founder added, “David is the natural choice to lead Alliant National. He understands the needs of our agents and has an eye on technology and the future. He is committed to upholding Bob’s legacy, and we are excited to support David as he helps position Alliant National – and our agents – for even greater success.”