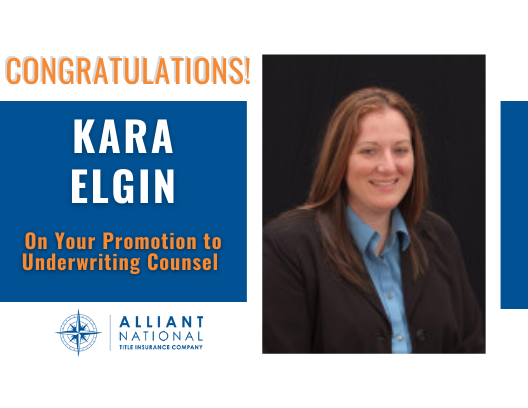 Alliant National Announces the Promotion of Kara B. Elgin, Esq. to Underwriting Counsel

Written by Cathie Beck on April 7, 2022. Posted in Press, Something to Celebrate - Employee Spotlight

Longmont, Colo. – (April 04, 2022) – Alliant National Title Insurance Company, the title insurer that is uniquely responsive to the needs of independent agents, announces the promotion of Kara B. Elgin, Esq. to Underwriting Counsel – Kansas, Missouri and Nebraska.

Elgin initially joined Alliant National in March of 2020 as Associate Underwriting Counsel. A seasoned attorney, Elgin brought nearly 14 years of experience in real estate law to the company, allowing her to quickly make major contributions to its regional operations and support its network of independent agents. In her new role, Elgin will leverage this experience to further support agents’ day-to-day title underwriting needs and offer legal guidance on title and real estate-related matters.

“I am beyond thrilled to accept this promotion and continue to work with a great team and our extensive network of hardworking independent agents,” said Elgin. “It’s truly a pleasure to go to work each day at Alliant National and collaborate with some of the best and brightest professionals in the business. I’m excited to continue growing in my role, to take on new challenges and initiatives, and to help further solidify Alliant National as the industry’s leading title insurance underwriter.”

“Kara is an integral part of our legal team and has been instrumental in helping our agents succeed in their business,” said Jeff Stein, Chief Underwriting Counsel and Senior Vice President at Alliant National. “She has more than earned this promotion, and I have high expectations for her continued growth within our company.”

Elgin received her Juris Doctor at the University of Missouri-Kansas City School of Law. Prior to that, she obtained her bachelor’s degree in political science from the University of Central Missouri. Elgin is also highly active in the title insurance and legal communities. She is a member of the Missouri and Kansas Bar Associations, as well as the land title associations of Mo., Kan., and Neb. In addition, Elgin serves on the education and legislative committees of the Nebraska Land Title Association (NLTA) and the legislative committee of the Missouri Land Title Association (MLTA).

She lives in the Kansas City metropolitan area with her family.

Alliant National supports its independent agents by combining expert residential and
commercial underwriting with a passionate heart for service. The company delivers
uncommon help that promotes the wellbeing of agents and the communities they serve.

Alliant National is on a mission to empower independent agents while protecting property owners with secure title insurance. The company partners with its agents and never competes against them with direct or affiliate operations. Alliant National serves thousands of title professionals as a licensed underwriter in 31 states and the District of Columbia. 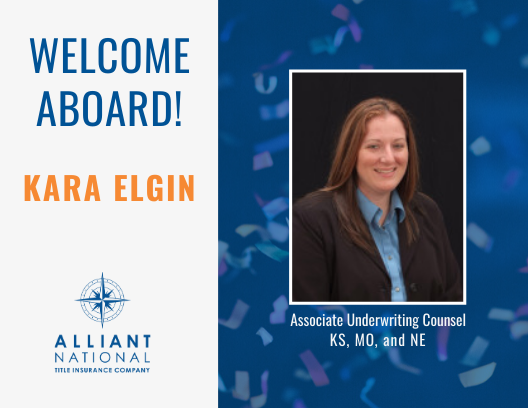 Welcome Kara B. Elgin as Associate Underwriting Counsel in Missouri, Kansas, and Nebraska

Elgin brings fourteen years of experience in real estate law to the new position, and affords Alliant National the opportunity to bring her level of expertise and commitment to the company’s 500+ independent agents. “My previous experience in title and real estate has been a building block for the work we’ll be doing in Missouri, Kansas and Nebraska on behalf of Alliant National’s independent agents,” says Elgin. “I am excited to be associated with a company with this level of growth and stellar reputation.”

“Kara is an asset to our Alliant National team on many levels,” says Margaret Cook, Deputy General Counsel and Senior Vice President of Alliant National Title Insurance Company. “Kara’s positive attitude, experience and knowledge, coupled with her ability to align her talents with our independent agents and their goals, helps create continued growth for Alliant National.”

Elgin received a Bachelor of Science from Central Missouri State University, majoring in political science, and her Juris Doctor from the University of Missouri at Kansas City School of Law.