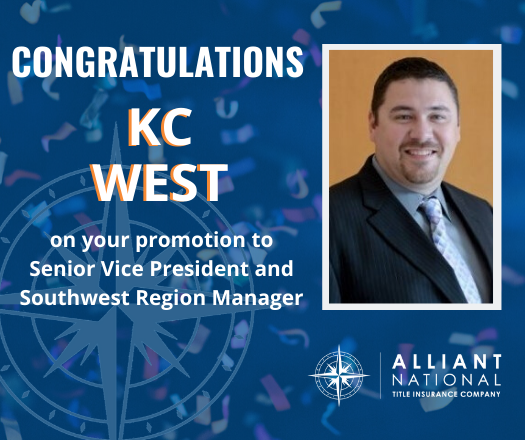 Written by Cathie Beck on July 22, 2020. Posted in Press, Something to Celebrate - Employee Spotlight

Longmont, Colo – (July 23, 2020) – West assumes regional duties following the promotion earlier this year of Rodney Anderson to National Agency Manager. West will expand his current responsibilities in Texas and Oklahoma to include developing, marketing and managing Alliant National’s Southwest Region, which along with Texas and Oklahoma, includes, Arkansas, Louisiana and New Mexico.

West is a 22-year title industry veteran having worked his way up through the ranks.

“KC has done just about every job in the title industry from abstractor, examiner, closer, area manager, vendor manager, Agency Manager, State Manager, and KC has earned the Regional Agency Manager’s role based on his stellar performance, industry knowledge, and incredible relationships within the industry,” says Rodney Anderson. “I am proud of the accomplishments of KC West, and it is with great pleasure that Alliant National makes this announcement.”

“KC joined us just two years ago, and I’m deeply impressed by how quickly he has established himself as an integral member of our organization,” says Alliant National CEO David Sinclair. “KC has had tremendous success building relationships in Texas, and he is uniquely positioned to lead our team to future success across the region.”