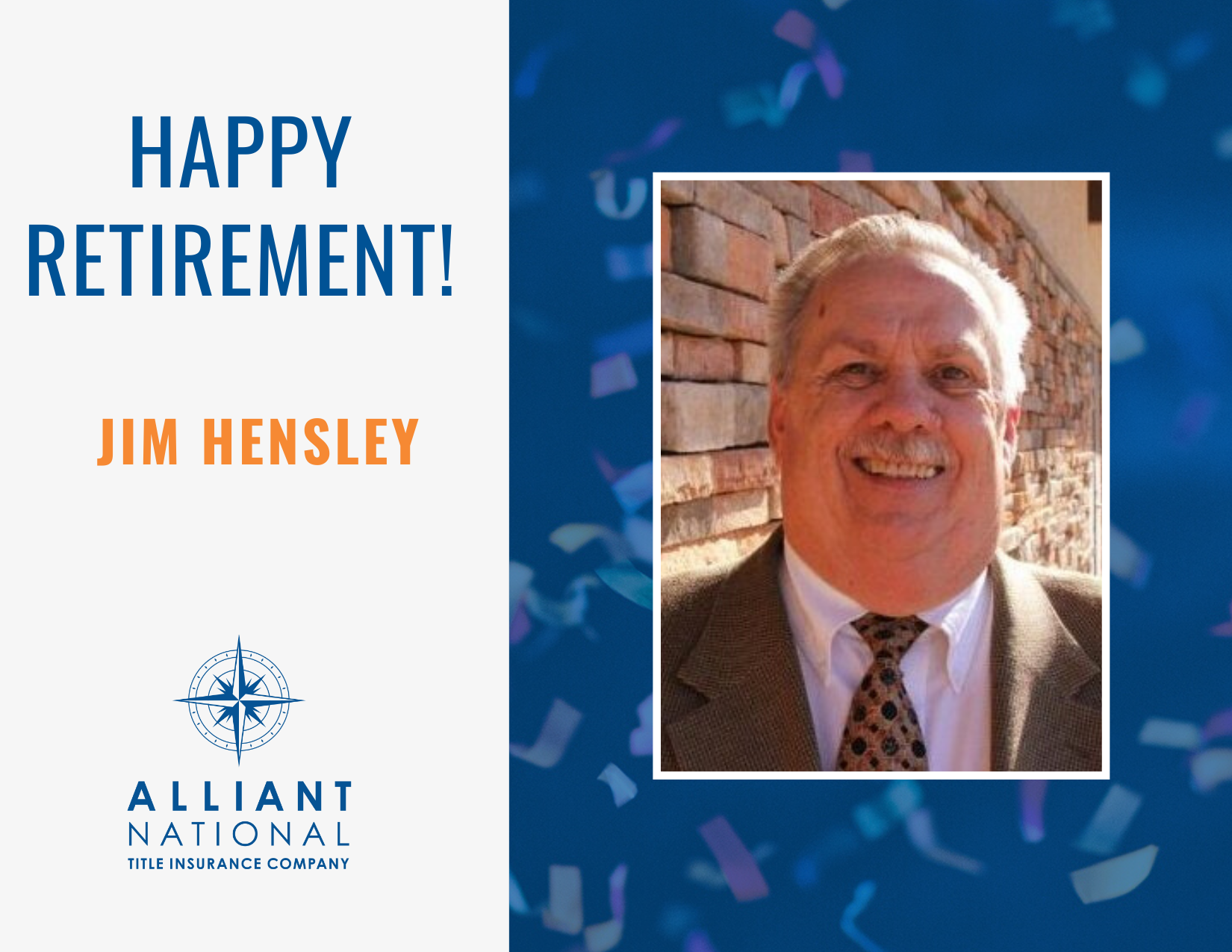 LONGMONT, Colo. (Oct. 28, 2019) – Alliant National Title Insurance Co. announced today that it is expanding into five states and will recalibrate its West and Midwest regions to better serve agents.

The shift comes as veteran title professional Jim Hensley, who has achieved legendary status in the Midwest over his more than 40 years in the industry, steps back into a part-time role with Alliant National. His protégés will head up the two new regions.

“We are grateful to Jim for his hard work and his investment in the future of our company,” said President and CEO David Sinclair. “Not only has he shown up each day in service to our agents, he has also served as a mentor to the next generation of title professionals at Alliant National. As Jim finishes his leg of the race, I have the utmost confidence his successors will pick up the baton and continue to move us forward.”

Grant was chosen as a 2016 Young Title Person of the Year by the Missouri Land Title Association and joined Alliant National in the same year. Previously he ran TruHome Title Solutions, a multi-state title company based in Kansas City, and was an agent of Alliant National.

“This is an exciting time for our company, and I’m excited to take on this new challenge,” Zehner said. “I feel like I have some big shoes to fill, and I intend to deliver the same personalized service to our agents that has helped us grow so successfully under Jim’s leadership.”

Manoj came to Alliant National in 2018 and has been associated with the mortgage, title and title technology industries for over 30 years. His previous tenure includes working for two of the four major underwriters as well as a regional underwriter.  He also served as president and chief executive officer of a settlement services company in New Jersey.  Manoj is also a veteran of the armed forces having served in the New Jersey Army National Guard for 9 years as a reconnaisance scout.

“With Jim’s previous hard work and leadership, these new regions are both poised for much success,” Purohit said. “I look forward to carrying his legacy forward of serving our agents and welcome the opportunity to expand Alliant’s footprint to the additonal states with our ‘Agents First’ philosophy.”

“Over the past several years it has been my pleasure to serve the independent agents in the Midwest with care and dedication to the entire ‘Agents First’ philosophy,” Hensley said. “I feel very confident that the agents currently with Alliant National Title as well as all of those who will desire to become a part of this unique organization are in very capable hands.”

The Independent Underwriter for The Independent Agent® – Alliant National believes in empowering people to thrive. The company protects the dreams of property owners with secure title insurance and partners with 500+ trusted independent title agents as a licensed underwriter in 24 states and the District of Columbia, with annual revenues exceeding $126 million.

Cathie Beck Capital City Public Relations e : cathie@capitalcitypr.com p : 303-241-0805 In this role, Purohit will be responsible for further developing and marketing Alliant National’s Great Lakes Agency programs, with an initial focus on agency development and management in Minnesota and Wisconsin, Hensley said, adding that Purohit will also lead the expansion of Alliant’s agent base by growing the number of states included within Alliant National’s Great Lakes Area. “I have always dedicated myself to building long-term and mutually beneficial relationships,” said Purohit. “Alliant National’s outward-mindset philosophy and its ‘Agents First’ approach allows me the opportunity to provide best-in-class customized service to my agents. The company’s focus on never competing with its agents while providing them the tools they need to thrive in their marketplace is the reason I chose to join Alliant National Title Insurance Company.” Purohit’s career has included sales positions at several mortgage, title services and title technology companies, as well as working as an agency representative for a regional and two national underwriters. He also served as president and chief executive officer of a settlement services company in New Jersey, where he managed all aspects of daily operations. In addition to his sales career, Purohit served as a Sergeant in the Army National Guard for nine years. He was a combat reconnaissance scout and received several commendations, including the National Defense Service Medal. His education includes course studies in computer programming at Rutgers University and the Chubb Institute. Alliant National is an industry pioneer that distinguishes itself from competitors by putting the interests of Independent Agents first. Bolstered by financial stability, strong underwriting capability and Independent Agents’ in-depth knowledge of local markets, the company has established a nationwide network with deep roots in local communities and a wealth of expertise that is flexible, nuanced and continuously growing. Alliant National’s CEO, Bob Grubb, can be reached at 303.682.9800 x300 or bgrubb@alliantnational.com. Visit joinalliantnational.com for additional information.

The Independent Underwriter for The Independent Agent® Alliant National believes in putting other people first. The company partners with 400+ trusted independent title agents as a licensed underwriter in 22 states, with annual revenues exceeding $120 million, and protects the dreams of property owners with secure title insurance.