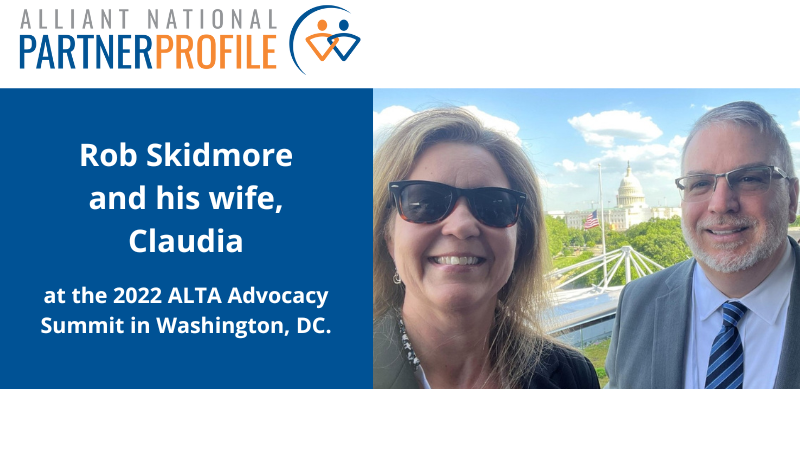 Written by Adam Mohrbacher on July 11, 2022. Posted in Agents First

Rob Skidmore knows his way around title insurance. The owner of several agencies underwritten by Alliant National, he and his employees serve aspiring homeowners in Medina and northeastern Ohio and are driven to help home buyers achieve their dreams.

His journey in the title insurance field offers a fascinating portrait of a professional life well lived, as well as how the industry has changed over more than three decades.

Title insurance is a multi-generational endeavor for the Skidmore family. His father started Transfer Title in 1967, with Rob joining the business in 1985. He eventually took over the company with his brother. They gradually expanded the business, forming the joint venture company Transfer Title Connection in 2004 and acquiring Ohio Fidelity in 2018.

There were other factors behind Rob’s initial interest in title insurance, such as his passion for technology and computers.

“When I was in college, I had this class that required a spreadsheet. I created a settlement statement with macros that could compute settlement costs,” said Rob. “After graduation, I used it in business for maybe six or seven years before we updated to a new system.”

His interest in technology trends has continued to benefit Rob and his businesses, prompting him to be an early adopter of new technologies to increase efficiencies, improve customer experiences and grow profits. One such decision involved implementing RamQuest software early on, which made them only the second title company to do so in Ohio at the time.

“I love the technology – the experience of building out our IT department, purchasing our own server and so on,” said Rob. “My interest has pushed me to be an early adopter, which has benefited our employees and customers.”

Another factor that has influenced many of his decisions as a company owner was his background as a business major with a marketing concentration. Rob was immediately attracted to the prospect of overhauling his agencies’ brands.

“I quickly started working on our slogan, which ultimately led to a name change,” said Rob. “We also decided to do a major overhaul of the logo, which involved an internal focus group.”

Over the years, Rob has found his title career to be quite rewarding, especially the way it has benefited his community.

When asked if there is a central passion behind his work, Rob is unequivocal. “Absolutely. Our motto is ‘Insuring Reality, Conveying Dreams.’ People outside the industry don’t get that when you’re issuing title policy, handling escrows and doing closings, it’s a joyous occasion. Take a young couple who has the dream of starting a family. Or consider someone who is looking to downsize. It was their dream, and they are passing it along to the next family. In both cases, it’s an extraordinary thing.”

Another way Rob has been able to better his community is through charitable giving. As a long-time member of the local business networking group, Transfer Title annually sponsors families at Christmas and makes a variety of donations to local charities. In addition, the company is a supporter of the Mary Grace Foundation, sponsoring its 5K run each year and encouraging employees to run or participate. The money raised during the event goes to families impacted by breast cancer.

Transfer Title’s commitment to enriching the heart of the Medina community is perhaps best embodied in its support of Mainstreet Medina. A non-profit organization, Mainstreet Medina supports efforts related to the historic preservation, economic sustainability, and continued evolution of Medina’s Historic District as the community’s vibrant center. Transfer Title not only routinely sponsors Mainstreet Medina’s initiatives and events, but it has conducted title work for real estate revitalization efforts undertaken recently by the Recovery Center of Medina, which included pro bono legal work by Rob.

Rob has impacted Medina not only through his company, but also by serving on various community, business and industry associations. He is an active participant in the Ohio Land Title Association (OLTA) and has previously served as the President of the Medina City School Board, the Medina County Career Center, the Medina County Bar Association and the Salvation Army board.

In addition to witnessing the positive effects his businesses have had on the community, Rob’s long history in the field has given him a front row seat to the evolution of the title industry.

“The title industry has changed a lot, and I have seen different eras come and go,” said Rob. “Recently, it has been a very profitable era, which is positive in many ways. However, there is increasingly a focus on speed, with everything being go, go, go. Less emphasis is being placed on expertise and working diligently through a process. Marketing and newer communication mediums like social media are taking more precedence. Now, both are important. Very important. But expertise and doing good work will always trump everything else.”

As Rob sees it, prioritizing expertise matters, particularly when it is not always clear to the customer how the title insurance process works and why it is a critical component of the closing process.

“Sometimes during closings, questions will come up of how the company got involved. It’s important to properly educate the customers and remind them that we are here to insure their title,” Rob explained. “We act, essentially, as a guarantee on their claim of ownership. With a one-time premium, they are protected for life. As a third party, you need the expertise to work on behalf of the owner, buyer and lender. Simply put, it’s a very important function. We need to follow the directions of all parties, not to mention look at and assess all relevant risks.”

Rob emphasized that to succeed in the field requires building a team with the requisite expertise. But that is not all. Those working in title insurance must also be equipped to contend with the emotional intensity that can be a part of the closing process.

“Without a doubt, attracting and retaining top talent is one of the biggest challenges I face as a business owner, and we’ve been lucky to have some of the best staff in the business,” said Rob. “Employees need to know their field but also deal with the stress of closing on a property.”

Considering the complexity of real estate transactions, title insurance professionals must be comfortable expecting the unexpected.

“Quite often, things happen or there are forces at work beyond anyone’s control,” he said. “Thankfully, advances like ‘clear to close’ have changed the game and streamlined it. Technology helps.”

As with anything, though, technology is not without its downsides, as cyber threats like real estate wire fraud have exploded in recent years. Such developments once again underscore the need for high-quality IT systems and experienced professionals who can safely guide consumers through the process.

“You’re only as good as your weakest technological link in the transaction,” Rob cautions. “Cybercrime is a huge problem in this field. Title agents must communicate effectively with customers about all pertinent risks. We have spent a lot of time and resources implementing preventative measures like encryption. But sometimes, old school methods like snail mail are still the best approach.”

Another piece of the puzzle is finding trustworthy underwriters with whom to build effective and mutually beneficial partnerships. In Rob’s case, one such underwriter is Alliant National.

He is particularly appreciative of Alliant National’s great technological systems. In addition, he noted that the underwriting relationship is often a key factor in determining what properties can ultimately be closed. He explained that not all underwriters are the same in how they approach deals or navigate risks.

“There can often be potential defects in the chain of title,” said Rob. “Some underwriters may not like that. But with Alliant National, I have a lot of confidence in their management, technology and, of course, people in navigating those issues.”

After more than three decades in title insurance, few people are more well-versed in the field or capable of commenting on its evolution than Rob Skidmore. Through building out his businesses, he has achieved a great deal of both personal and professional satisfaction and shared the fruits of his efforts with his surrounding community. He has also continuously prioritized what has always been essential to a good and lasting business: focusing on people, creating relationships and establishing hard-won expertise. These are the principles that animate him. They are also what he seeks to impart to those who may come after him.

“Whenever you’re faced with making a customer happy or doing the right thing, always do the right thing, even if you lose some business because of it,” he said. “Business always comes back in other ways. There is an old saying about how it takes a lifetime to build a reputation but a second to lose it. I couldn’t agree more. In title insurance, you may find yourself faced with such decisions. Always, always, always, do things the right way.” 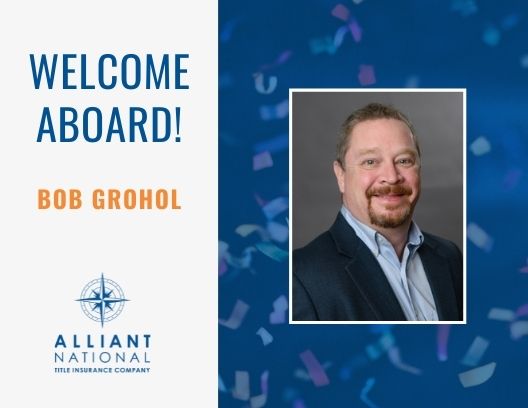 Alliant National Announces the Hiring of Bob Grohol as Assistant Vice President and State Manager of Ohio, Pennsylvania and Michigan.

Longmont, Colo. – (May 27, 2021) – Alliant National Title Insurance Company, a unique title insurance underwriter that partners with independent agents to improve their competitive position, announces the hiring of Bob Grohol to the position of Assistant Vice President (AVP) and State Manager of Ohio, Pennsylvania and Michigan.

Grohol is a knowledgeable, passionate and highly skilled professional, with deep ties to the real estate and title insurance fields that go back nearly 25 years. His extensive career has included positions with various technology firms, where he worked to equip title insurance companies with valuable solutions, such as eRecording services.

During this work, Grohol became involved with many land, title, legal, underwriter, county recorder and register of deed associations across 20 states, gaining a comprehensive understanding of the industry in the process. One such association is the Ohio Land Title Association (OLTA), where Grohol served as Chair of the OLTA’s Technology Committee for several years. He also authored several articles for OLTA’s Title Topics publication, as well as other association publications.

Grohol’s past experiences will serve him well at Alliant National, where he will be responsible for signing, developing, marketing and managing Alliant National’s policy issuing agents, as well as helping them achieve strong business growth.

“I’m very excited to join Alliant National and contribute my experience and knowledge to its mission,” said Grohol. “The team at Alliant National is second to none, and I am looking forward to working alongside every one of them.”

“Bob brings decades of experience to Alliant National, and he will be an incredible asset in supporting and growing our network of independent agents,” said Manoj Purohit, Senior Vice President, Central-West Regional Manager. “I’ve personally known him for years, and I continue to be impressed with his passion and knowledge of our industry. Bob will undoubtedly serve as a valuable resource for our agents and our company as we navigate the unique landscape ahead.”

Outside of his professional life, Grohol is a karaoke and cooking aficionado. He is also the proud father of a daughter who recently graduated from college and is preparing to embark on new adventures.

The Independent Underwriter for The Independent AgentSM – Alliant National believes in empowering people to thrive. The company protects the dreams of property owners with secure title insurance and partners with 500+ trusted independent title agents as a licensed underwriter in 27 states and the District of Columbia.