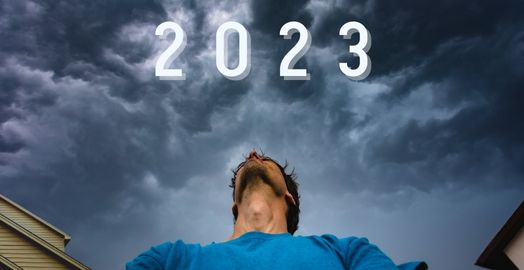 Economic And Real Estate Outlook Cloudy, But Not Stormy

The real estate market has cooled over the past quarter, as buyers face mounting economic pressure from inflation, bloated housing prices, and escalating interest rates. But the question in most forecasters’ minds is what will happen in 2023 with inflation and interest rate projections in – as yet – unknowable territory.

Although experts are all over the map when it comes to predicting interest rates – projections for 2023 are currently ranging from 5% to 9% – everyone agrees that it largely depends on the Consumer Price Index and the Federal Reserve’s interest rate decisions that result from that data.

Rodney Anderson, Executive Vice President, National Agency Manager with Alliant National, noted on a recent October Research webinar that while we are currently experiencing a slowdown in the market, it’s difficult to say what portion of that is seasonal and how much is interest rate-related.

“We’ve had a sellers’ market for a long time, and now, we are returning to equilibrium,” he said. “But if you look at the number of houses on the market, we are still in a sellers’ market, with a lot of regions experiencing only a 3-months’ supply, so there is continued support for prices to remain fairly stable.”

Although there remain a lot of unknowns, many economic forecasters retain a sense of cautious optimism based on what we do know, while lenders and real estate professionals are facing the reality of lower sales and originations in 2023.

The Federal Reserve’s battle against inflation remains one of the key factors in the overall economic outlook for next year, as well as the outlook for the real estate markets, since with each incremental rise in the interest rates, a new segment of buyers will be priced out of the market.

The Federal Reserve has maintained a hard line with regard to inflation, and Federal Reserve Chairman Jerome Powell did not soften his tone during his Dec. 14 presentation following the December meeting of the FOMC, where he announced the Fed would be raising the interest rate another half percent.

In addition, Powell said he anticipated that “ongoing increases would be appropriate in order to attain a stance of market stability that is sufficiently restrictive to return inflation to 2% over time.”

One positive indicator in December was the Consumer Price Index, which showed inflation had slowed to 7.1%. While that stat was encouraging, Powell said it was not enough to deter further interest rate hikes.

“It will take substantially more evidence to provide confidence that inflation is on a sustained downward path,” he said.

With the target federal funds rate range now at 4.25-4.5% and Powell suggesting further hikes, it is now anticipated that the federal funds rate could rise to 5.5% in 2023, adding some further deterioration to the pool of potential buyers.

The Federal Reserve’s Nov. 30 release reported economic activity was flat or up slightly across most of the districts, a sign that the economy continues to hold its own despite the known headwinds of inflation, high interest rates and global issues.

Reports across sectors were uneven. Not surprisingly, lending, home sales, apartment leasing and construction all exhibited slowing trends while improving inventory in the auto industry has resulted in an increase in sales in some districts. In addition, spending was up in travel and tourism, and as well as in restaurants and hospitality. Manufacturing was also up slightly on average.

Total nonfarm payroll employment increased by 263,000 in November, and the unemployment rate was unchanged at 3.7%, according to the Dec. 2 release from the U.S. Bureau of Labor Statistics. Notable job gains occurred in leisure and hospitality, health care, and government. Employment declined in retail trade and in transportation and warehousing.

Consumer confidence concerns were largely allayed by record Black Friday and Cyber Monday spending. Although inflation has taken its toll on consumers, low unemployment has kept spending steady across many sectors, including mortgage and rent payments, a factor that is keeping foreclosures contained.

Employment is also a major factor in keeping foreclosures down, and while labor demand is weakening, according to the Federal Reserve, businesses are expressing a reluctance to lay off due to hiring difficulties. Most importantly, most districts reported a fairly positive outlook, pointing to stable or slowing employment growth and at least modest further wage growth moving forward.

While the economy overall appears to be stable, the real estate market continues to decelerate.

While there are always seasonal declines in the fall, the year-over-year number was more dramatic, with pending transactions down 37%.

“October was a difficult month for home buyers as they faced 20-year-high mortgage rates,” said NAR Chief Economist Lawrence Yun. “The West region, in particular, suffered from the combination of high interest rates and expensive home prices. Only the Midwest squeaked out a gain.”

On the upside, Yun was hopeful that the upcoming months will see buyers returning to the market if mortgage rates moderate, as they have in the past few weeks.

“We expect house prices to decline modestly, but the downside risks are elevated,” Freddie Mac noted. “As the labor market cools off, housing demand will remain weak in 2023, potentially resulting in declines in prices next year. However, home price forecast uncertainty is wide due to interest rate volatility and the potential of a recession on the horizon.”

Data can certainly tell us a lot, but at the end of the day, consumer experience and assessments can impact the long-range reality, and consumer confidence is decreasing, according to the Conference Board Consumer Confidence Index.

While not dramatic, the index backtracked to 100.2 from 102.2 in October. In addition, consumers assessment of the current conditions decreased to 137.4 from 138.7 last month, and consumers’ short-term outlook declined to 75.4 from 77.9.

Consumer confidence can keep the economy and the real estate market moving forward, while hubris can take us into unsustainable territory, as we learned in 2008. A little reality check may not be a bad thing as we all continue to keep tabs on the data and plan for a softer market in 2023.